Sunday’s swim at Alki, while brutal conditions wise was also a total dream come true. Why? I received the “seal” of approval as my toes were kissed by a seal! I’m pretty sure it was my seal friend Rufus, who I’ve been working on building a relationship with over the past year. Regardless, it was an experience that I have been waiting for and working towards for the past three years and it finally happened!

These types of experiences are really hard to “work for” as it’s basically a goal that has to happen naturally, that can’t be forced. Incremental progress can’t be measured and can’t really be quantified either. My progress involved becoming more comfortable in the water, educating myself about the sea and marine life, learning more about the relationship between humans and the sea and developing a respect for the sea almost as if were a living being. In the end, I’ve come to believe that the sea is most definitely alive, has feelings, and can tell when someone respects what it is. The sea is not water, it is a home to all that live there and we are simply visitors that are welcomed in.

Regarding Rufus, what can I say, he’s sort of my guy! I’ve seen him on an off for the past year and he has come to know my voice and me calling his name. I think he knows what I look like too, but I can’t be certain. While I have no proof this was him, I have a feeling it was by the way he interacted with me. I never approach him. While I swim with him, I don’t swim towards him, always side to side and we do a sort of circle dance together.

This particular day I was having trouble with the combination of the current, waves and exhaustion. I whispered to Mother Nature, if you give me an animal I promise I will finish. As I was heading towards the point, my turnaround point, I nearly quit when I suddenly saw what I thought was a huge fish beneath me. It was low tide, about three feet of water when it hit me, wait, I think that’s a harbor seal. I stopped and sculled on the surface and that’s when I saw him dive under and then swim under me in barely 3 feet of water. The light rays from the sunshine were coming through the water and making art on the seafloor. The seagrass was waving as we played together, twirled in the water, swam, and had underwater breathing contests (he won). As I came up to the surface I was floating on my back enjoying the sunshine when he surfaced and slowly came up behind me. I made sure to stay very still, not move towards him, maintained floating and I watched his cute little nose touch my toes! I could feel his whiskers on my feet and his little snout pressed up against the arches. This was the moment that I had been waiting for, that I had been patient for over the past three years. It only lasted a few seconds before he dove under again, but those few seconds are a lifetime of memories. We played for five minutes more, watched the bald eagle on the sandbar, and then both swam off. After all, 51 degree water gets chilly after not doing anything for 20 minutes!

My biggest lesson learned was self reflection on experiencing joy in life and the experiences non-race related have been able to offer me. I love that I’m a swimmer, I love that I’ve been able to adapt to the cold water, and I love having a positive relationship with the sea. My heart is full today.

The photo below is the first time I caught an underwater photo of Rufus during one of our morning swims.  He’s the cutest guy I’ve ever seen! 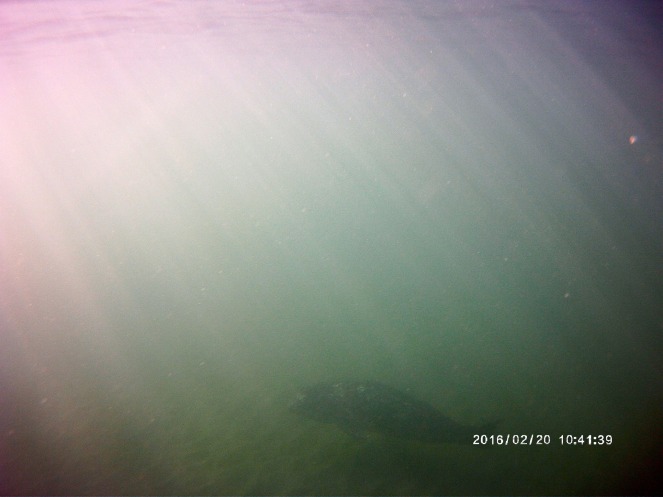